It has been three years since the emergence of COVID-19 and its impact on global life. To understand how the pandemic affected public media’s financial health, we analyzed station Annual Financial Report (AFR) data from the Corporation for Public Broadcasting (CPB) to help uncover recent trends in public radio and television finances.

Our analysis has found that overall revenue is higher than ever before but public television fared better than public radio during the first years of the pandemic. We also learned that size matters. Continuing a long-term trend, small stations have not been able to match the growth rates of large stations and have been particularly hard hit by cuts in institutional support. 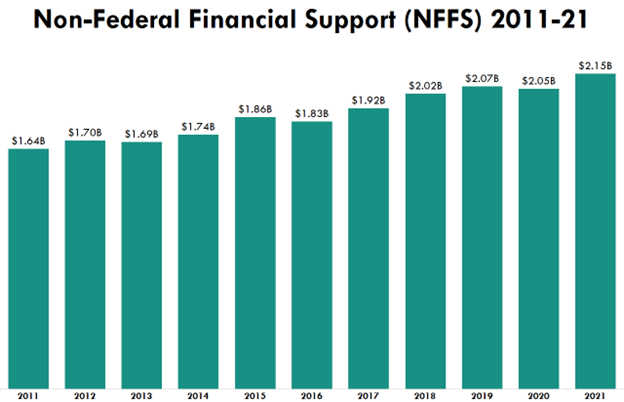 If we focus on total revenue rather than NFFS, increases in 2021 revenues were even higher. Endowments grew massively driven by stock market gains and federal pandemic relief funds also boosted total revenue numbers. However, as anyone with an investment knows, 2022 was a bad year for the stock market and so 2021 endowment gains were likely short-lived.

Quick aside: 2021 is the latest year of available AFR data. Initial 2022 data will not be available until late 2023. Also, NFFS is typically used in the analysis rather than total revenue because it focuses on revenue sources that are more locally controlled (e.g., individual giving, sponsorship, institutional support, etc.). This means that revenue sources such as market-based endowment gains and federal funding don’t show up in the NFFS numbers.

TV outgrew radio: Reversing a long-term trend, public television outgrew public radio in 2020 and 2021. In fact, radio NFFS declined in both years. It’s the first time in recent history that public radio has experienced a year-over-year decrease in NFFS. 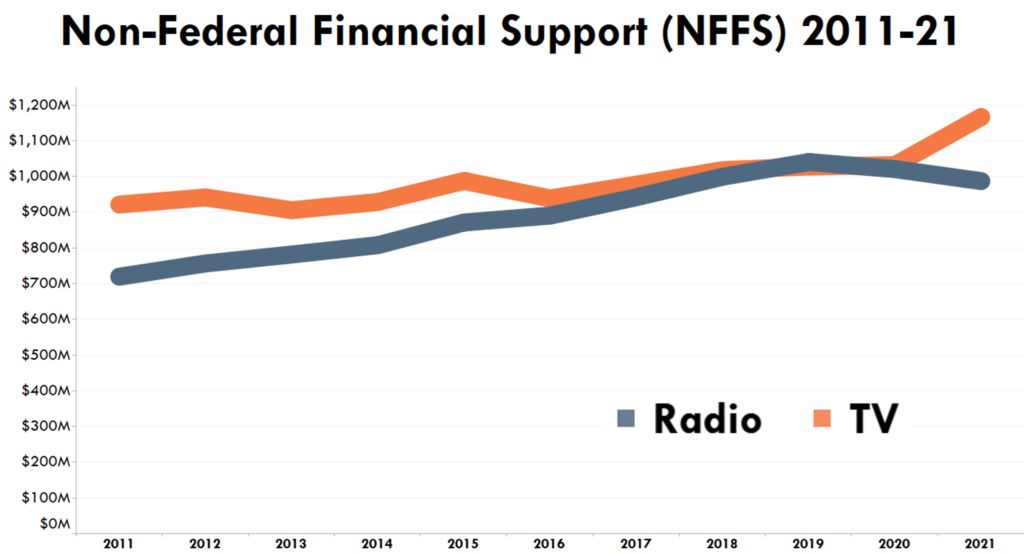 Much of radio’s decline was driven by a significant downturn in sponsorship. Commercial media experienced a similar decline but public television somewhat bucked the trend and even grew its underwriting revenue between 2020 and 2021.

Public television also outgrew radio because of individual giving. TV major giving revenue grew by 36% between 2019 and 2021 compared with radio’s more modest 20% growth. Thanks to growth in Passport subscriptions driven by more widespread adoption of streaming, public television membership revenue also increased: up 18% from 2019 to 2021 compared with 5% radio growth. 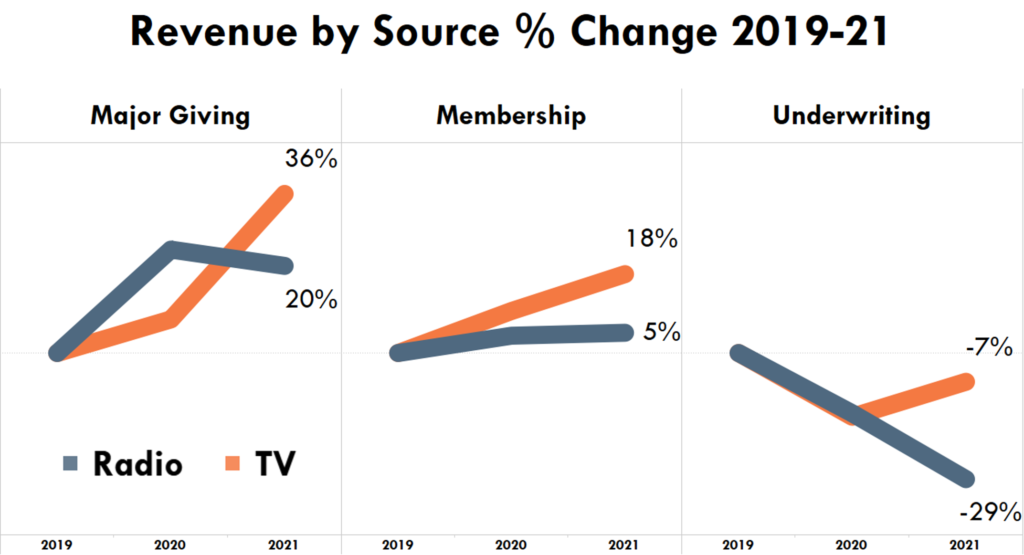 It is because of disproportionate cuts in institutional support and other challenges faced by small stations that Public Media Company launched the Impact for All initiative in 2021. 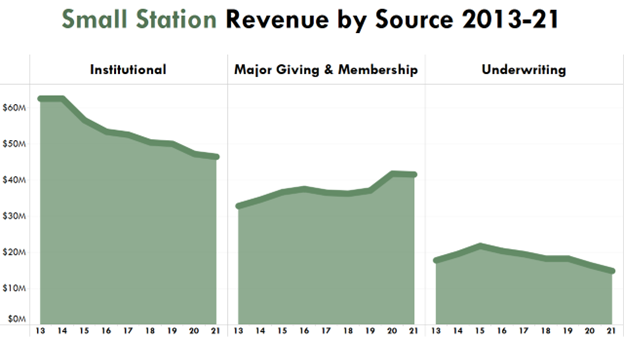 Be careful of cuts: During the Great Recession, public television stations made significant cuts in their fundraising and content budgets and this may have been a contributing factor in public television’s revenue struggles during the post-recession period (public radio stations didn’t make the same budget cuts and their revenue grew each year). The public television cuts have also been long lasting. Public TV stations spend less on content and fundraising today than they did in 2008 and, despite growth in recent years, Non-Federal Financial Support for television also remains lower today than it was in 2008.

The COVID-19 pandemic has also forced cuts at public media organizations but, this time, radio has made the most significant reductions. Between 2019 and 2021, public radio stations cut their expenses in fundraising by 17%, content by 5%, and underwriting/grants by 15%. Hopefully, this will not lead to a repeat of TV’s Great Recession experience. 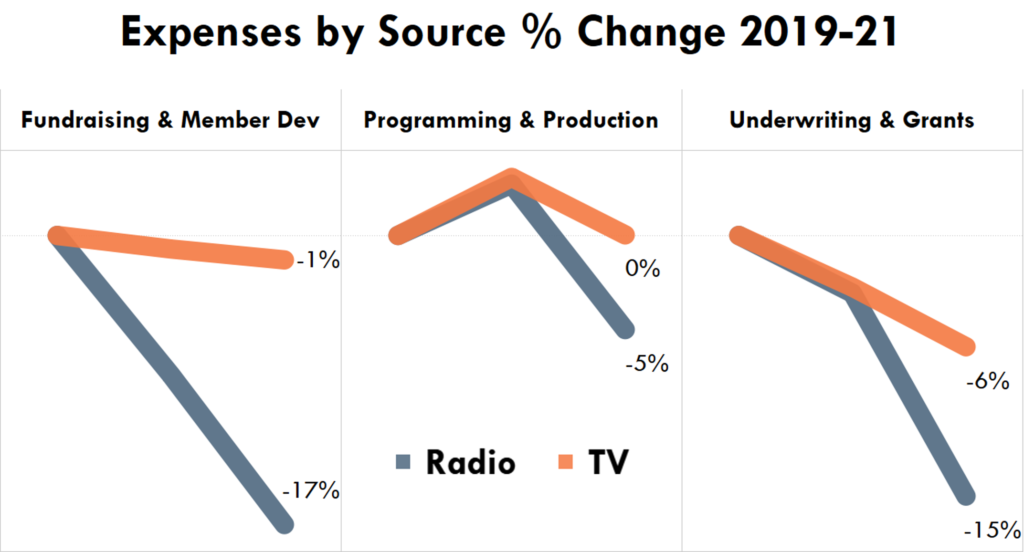 Be data aware: Remember that this data is for all public radio and television stations combined that receive funding from CPB. An individual station’s experience may not be consistent with overall trends. The charts and percentages in this post reflect overall industry totals and should not be assumed to be the trends of each individual public media station.

If you have questions about the data in this post or have other data questions on your mind, please contact Steve Holmes at steve@publicmedia.co.