The impact of Covid-19 is a very different financial shock than public media has seen before but it’s not the first fiscal challenge that the industry has faced. The Great Recession (December 2007 to June 2009) also posed a huge test for public radio and television stations throughout the country and so we thought it would be a good idea to take a look at what happened a decade ago. We found that, in general, public radio fared better than public television and that the recession hit some sources of revenue much harder than others.

Starting at the top, total revenue for public radio stations grew by $31 million (+4%) from 2007 to 2010 but public television station revenue declined by $272 million (-12%) over the same period (based on financial data from the Corporation for Public Broadcasting (CPB)). 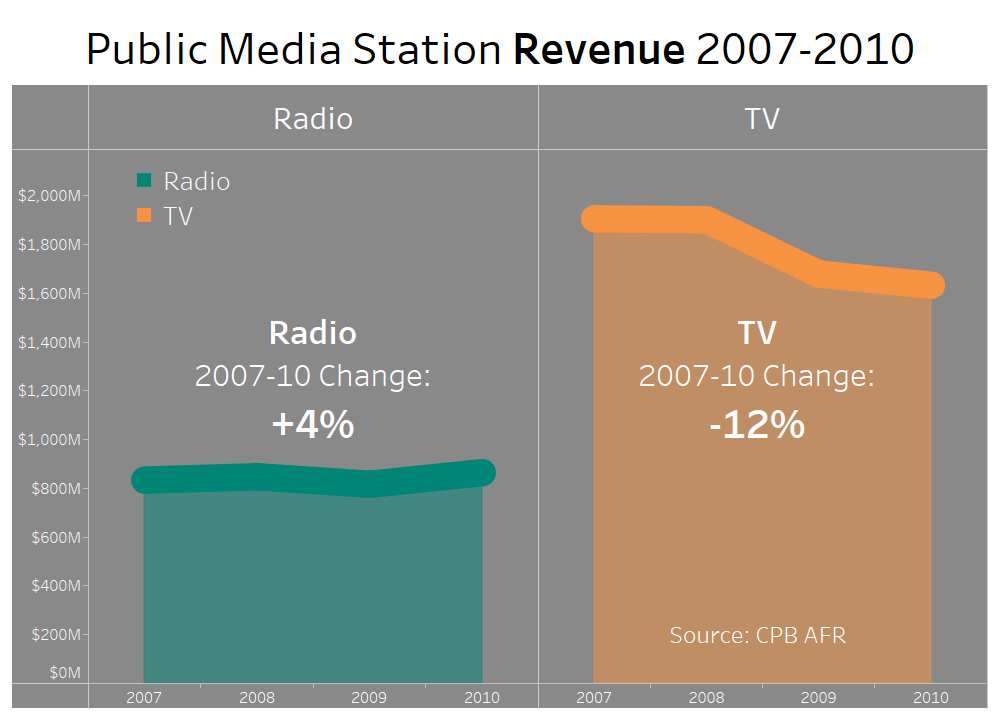 Breaking the data down further, the hardest hit group of stations was public television community licensees (stations that are independent 501(c)3 organizations) with a revenue drop of $222 million between 2007 and 2010, a 19% decline. Public television state networks were also hit hard – declining $43 million or 13% as a result of a big decrease in state support. Perhaps surprisingly, university stations were the least impacted group during the last recession. 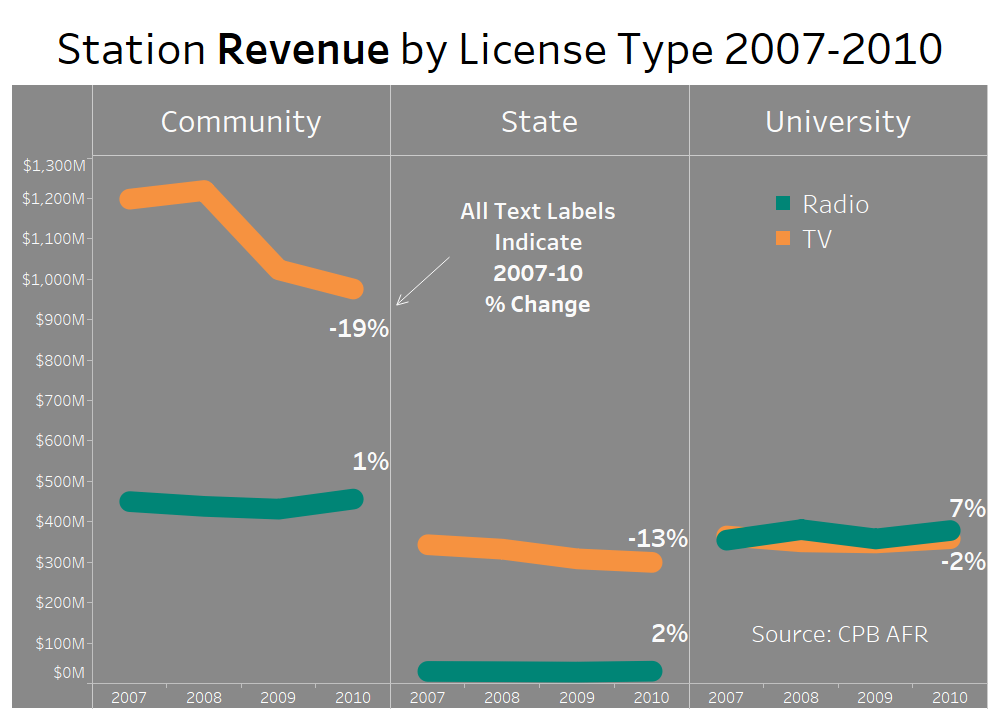 We learn even more by looking at revenue by source. Most significantly, both public radio and television stations experienced a big reduction in business and industry revenue (i.e. underwriting) during the Great Recession – something that stations are already having to deal with in this current crisis. Both station groups also saw declines in support from states and, to a lesser degree, from foundations as well. The biggest percentage revenue increase came from major donors – with revenue for both radio and television stations increasing by 72% in the 2007 to 2010 period. Major donor revenue was pretty small back in 2007 but this trend highlights the importance of staying close to key funders during tough times. 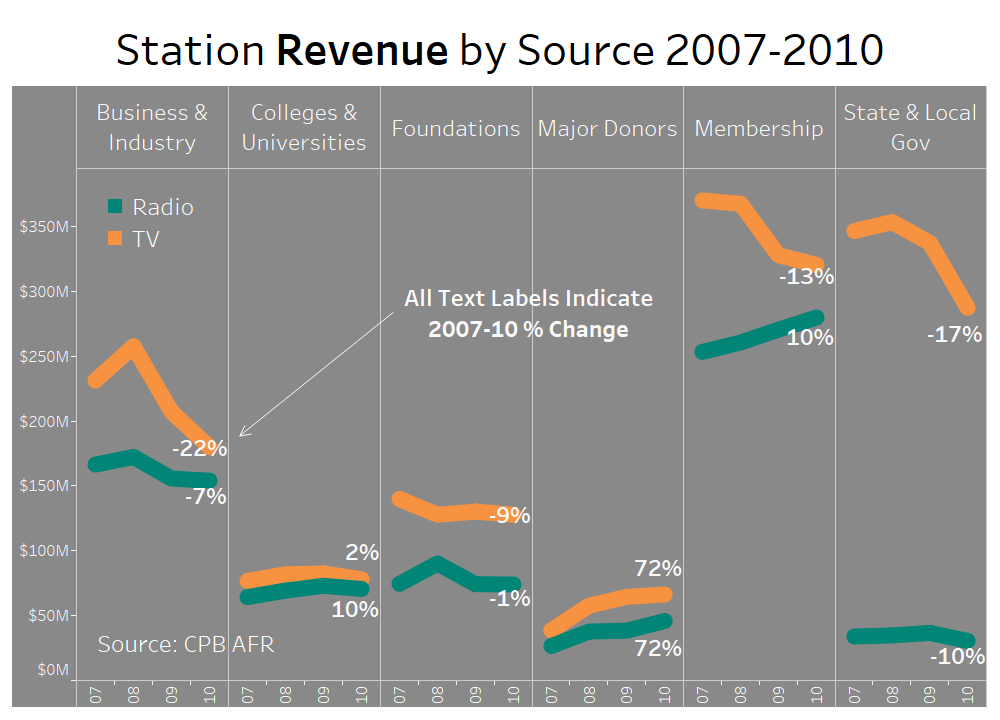 A possible reason for the membership disparity can be seen when we look at expenses over the same period. The expenses data shows that stations were forced to cut back in many areas during the previous recession but, for public radio, not every part of the station was reduced. Public radio stations increased their investment in fundraising (up $16 million or 14%) and in content (up $63 million or 18%) from 2007 to 2010 whereas public television stations reduced their investment in both areas over the same period (down 16% and 6% respectively). This may be why public radio station membership grew throughout the Great Recession and enabled radio to weather the storm in better condition than public television. Note: Anecdotal data suggests public TV membership is holding steady or increasing for many stations during the Covid crisis as viewers embrace Passport and streaming services in general. 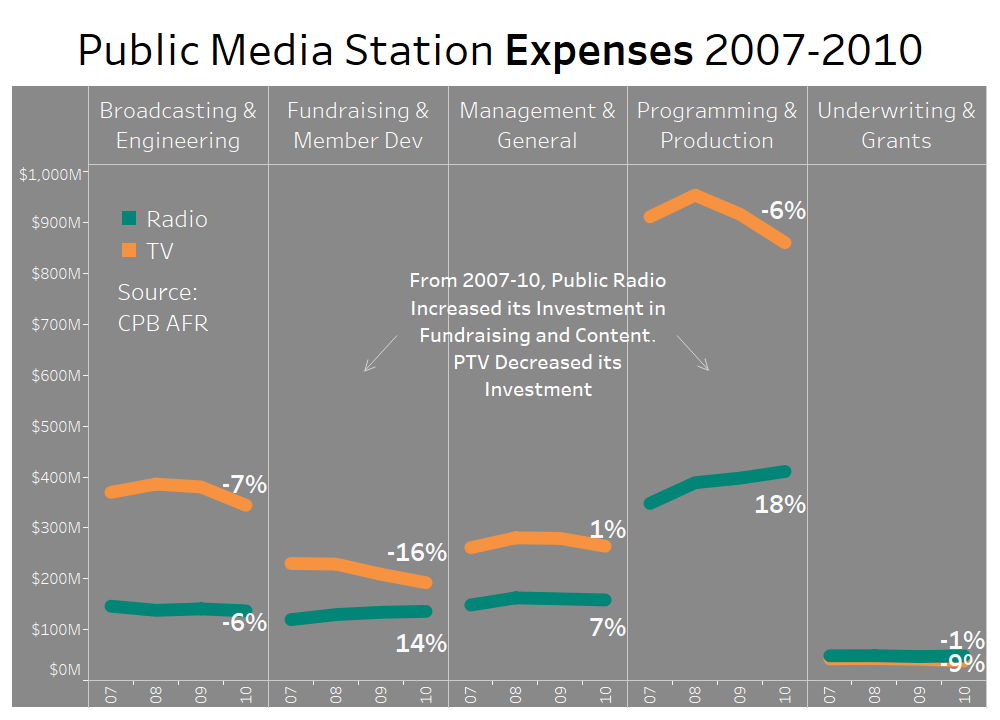 To wrap up, it needs to be remembered that the data we’re showing here is for all public radio and television stations combined and that the experience of individual stations was not always consistent with the overall trends. For instance, there are a number of examples of stations that increased their investment in fundraising but did not see an increase in fundraising revenue (and vice versa). The charts in this post reflect overall industry totals and should not be assumed to be the trends of each individual public media station.

Public Media Company is hosting two webinars to help stations navigate through this difficult period. Register and learn more on our webinars page:

Public Media Company collects, analyzes, and interprets a lot of public media data every day. If you would like to learn more about our work or help better understand your organization’s performance and potential opportunities for growth, please contact Steve Holmes.